On April 11th we brought the casting team for ABC’s Shark Tank to Washington, D.C. for the second  stop in a nationwide tour focused on bringing more diverese ideas and voices to the show.

I joined the Values Partnerships team in hosting three events with number of partners from throughout the nation’s capitol.

Before the 11th, I did some outreach to share the opportunity, I was pleasantly surprised to discover a monthly Shark Tank watch party at TheHive2.0 coworking space in Southeast D.C.!

At thehive coworking space in SE DC for a #sharktank pitch competition & watch party @thedchive We are taking the casting producers around the country to cultivate diverse ideas and voices for the show. More info here -> bit.ly/valuessharktank

The week before the event, I visited Howard University for the Howard’s Very Own entrepreneurship showcase featuring student, alumni, and faculty entrepreneurs.

I had a great time speaking to #entrepreneurs at the first @howardsveryown_ entrepreneurship showcase! @howarduniv Did you know, @forbes included Howard University on its 2014 list of “America’s Most Entrepreneurial Universities”?!?! We are bringing the Shark Tank casting team to DC this month, cant wait to connect entrepreneurs in the HU community to the show’s producers. Looking forward to seeing some of them pitching on ABC this Fall. Shoutout to @evcookiee and the @howardsveryown_ team for producing a great event. #hbcu #entrepreneurship #entrepreneur #forbes #sharktank #smallbusiness #blackbusiness #hbcubiz #howardsveryown #howard A photo posted by Brandon (@yesbrandon) on Apr 3, 2015 at 9:19am PDT

In Washigton, D.C., we hosted three events, a breakfast casting at TheHive2.0, a lunch casting at the United Negro College Fund (UNCF), and an evening casting at General Assembly.

Each event lasts about 3 hours, beginning with a short kickoff including event partners and quickly moving to pitch sessions. With two members of the casting team and a good flow, we get to hear around 60 pithches in that time. Each entrepreneur gets up to 3 minutes for their pitch and short discussion; about triple what they would get at a large open call casting. We follow up with everyone who applies to pitch at our events, and each entreprenuer we send to the Shark Tank team gets a follow up call.

TheHive2.0 coworking space is located in the historic Anacostia neighborhood in Washington, D.C.’s Ward 8. Headlines highlighting high crime and unemployment rates in Ward 8 have been the preavailing storylines for a generation. As the country continues to recover from the Great Recession, in March 2015, unemployment in D.C.’s Ward 8 remained at 16.5% double the rate in Washington, D.C. (7.7%) and triple the rate nationwide (5.5%). These statistics have been punctuated by conflict at the intersection of race and poverty.

TheHive2.0 is one of many new iniatives focused leveraging the innovation, skill, and dedication of community members to revitalize Ward 8, and provide a spark to change the community for the better. We felt it important to have the first casting event in D.C.’s Anacostia neighborhood, a community that needs entrepreneurship and investment; the response was incredible. 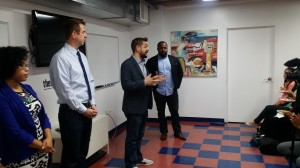 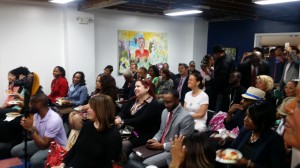 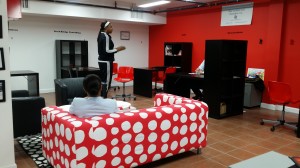 After an incredible start to the day in D.C., we headed to our lunch casting at UNCF’s DC Headquarters.

The United Negro College Fund supports more than 60,000 students at over 900 colleges and universities across the country. One of the 400 programs the UNCF administers is the UNCF/Koch Scholars Program. This program offers scholarship opportunities to talented African-American undergraduate, graduate, and postdoctoral students with both a demonstrated financial need, and an interest in exploring how entrepreneurship, innovation and economics contribute to well-being for individuals, communities and society. 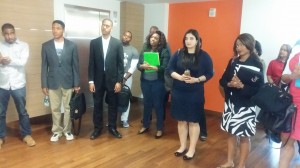 At the lunch casting event in Washington, D.C., we introduced the Shark Tank casting team to a special group of entrepreneurs from UNCF community and Howard University.

Through inititiaves such as the HBCU Innovation, Commercialization and Entrepreneurship (ICE) and UNCF/Koch Scholars programs, the UNCF is building the infrastructure and sharing the knowledge neessary to support entrepreneurship in communities around the country. We look foward to continuing to work with them. After our lunch casting, we linked up with our friends at the Ghost Note Agency for an evening casting at General Assembly’s Washington, D.C. campus.

Ghost Note is an integrated marketing agency based in Washington, D.C. The founding team works out of 1776 – a global incubator and seed fund based in DC. In 2014, the Ghost Note team decided to formalize a number of casual meetups focused on building the community of entrepreneurs from communities of color in DC; Technoir was born. Hosting several events in 2014, thousands of attendees have been introduced to the burgeoning community of minority tech and non-tech entrepreneurs working at 1776 and other spaces in and around the nation’s capitol.

Both 1776 and General Assembly – an educational institution that transforms thinkers into creators through education in technology, business and design at fourteen campuses across four continents – were supportive of Technoir from day one. We were excited to partner with the Ghost Note Agency and General Assembly to host our evening casting event in Washington, D.C.

After a short kickoff, entrepreneurs and attendees networked as entrepreneurs pitched to the Shark Tank casting team. We had some amazing businesses pitch at the evening event.

We heard from hundreds of entrepreneurs in DC. We hope to see many of them on Season 7. Next stop, Atlanta!