On June 18, 2015 I will moderate the Millennial Week Innovation and Entrepreneurship Forum at 1776 in Washington, DC.

In advance of the event, I am taking a look at what it means to be an millennial entrepreneur and/or millennial innovator.

They are Who We Thought They Were!

October 16, 2006 would prove ominous for the Arizona Cardinals and their Head Coach Dennis Green. After building a 20 point second-half lead on the then-undefeated Chicago Bears, the (1-5) Cardinals managed to lose the contest by one point; 24-23.

The game is consistently ranked as one of the best comebacks in NFL history. However, the actual game is often overshadowed by Coach Green’s post-game response. As you might imagine, the Cardinals were pretty bummed after an emotional loss. I’ve been there and…may or may not have shed a tear…

Coach Green was particularly crestfallen. After the game, he dispensed with the banality of press-room platitudes. Channeling his frustration, he uttered what is – perhaps – the most famous post-game phrase in NFL history; “they are who we thought they were!”

Coach Green’s verbal belligerence and assault on the press room podium left the audience nonplussed, and has been topping ESPN Top 10’s for nearly a decade.

Everyone has an opinion about millennials; fiercely independent, self-centered, altruistic, digital natives, with a strong entrepreneurial streak.

Are millennials the entrepreneurs we thought they were? Like some other – less flattering – assumptions about my generation, stats may not support the belief. Let’s take a look….

I feel like I live in an entrepreneurship echo chamber. Shows like ABC’s Shark Tank, media reporting about millennial entrepreneurship, and a consistent flow of emails and crowdfunding campaigns from friends building businesses around their dreams suggests that entrepreneurship is on the rise.

The Brookings’ report goes on to say that startup rate in the U.S. (startups as a portion of all U.S. businesses) has declined by nearly half since 1978.

The Organization for Economic Cooperation and Development has consistently ranked the U.S. startup rate (OECD calls it the “employer enterprise birth rate“) behind its peers in other developed countries.

Reports from Gallup, the Global Entrepreneurship Monitor and other organizations all support the finding that, in the U.S. entrepreneurship has been on the decline.

Kauffman’s 2015 National Trends Report showed a rise in the Startup Activity Index; the first time since 2010, and the largest year-over-year increase in the past two decades. The rate of new entrepreneurs also increased about 10 percent from 280 out of 100,000 adults in the 2014 Startup Activity Index to 310 out of 100,000 adults in the 2015 Index.

This is great news, however, startup activity is still well below historic trends. The U.S. ranks second in venture capital investment as a percentage of GDP and first – by a mile – in terms of total cash invested, but most that money supports more established businesses.

Fear and risk-aversion from lenders and the general population contribute heavily. As you might imagine, the Great Recession caused a spike in risk-aversion.

Startup activity in the U.S. was on the decline before the Great Recession, and the economic crisis caused the startup rate to plummet. In may ways, Millennials – also known as Generation Y – came of age during the Great Recession. Despite this, a survey released by Bentley University states that 67% of Millennials include starting their own business as a career goal. Are millennials America’s entrepreneurial saviors?

Millennials to the Rescue!

In America, millennials – born from 1981-1997 – are slated to comprise up to 75 percent of the workforce by 2025. In 2015, the oldest millennials are turning 34, entering the age that – historically – has been the prime age for entrepreneurship.

Millennials are the most highly educated generation in American history with significant exposure to entrepreneurship education. Contrary to, what may be, popular belief over the past decade, the portion of founders in their 50s and 60s has increased. The rate of entrepreneurship for Americans aged 20-34 fell from 34% in 1996 to 23% in 2013.

This means that Millennials started 19,000 fewer businesses each month. Coming of age during the Great Recession, underemployment, higher rates of student debt, and lower asset accumulation are all affecting the rate of entrepreneurship for millennials.

In 2014, 34% of 25-to-34-year-olds said fear of failure would prevent them from starting a business. This number is down from 41% in 2013, but shows that millennials aren’t quite throwing caution to the wind in search of entrepreneurial adventure and glory. 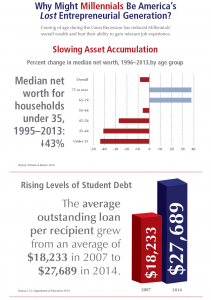 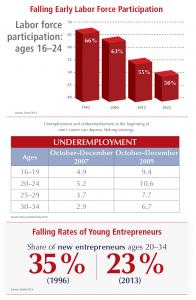 Are Millennials Who We Thought They Were?

Let’s hope so. New businesses have an out-sized effect on innovation and productivity. Without them, the economies slow. Leigh Buchanan from INC. Magazine sums it up well:

“The underlying worry is churn. In a dynamic economy, businesses are born, grow, and die; jobs are created and lost; and resources are reshuffled according to their best use. If there are fewer new companies and more aging ones, then labor and capital hang tight in old industries. The economy is not refreshed and growth slows.”

As aforementioned, the American startup rate has been on the rise in the past couple years. Economists to expect a rebound with a significant increase in new businesses being started soon. As the U.S. population grays and shrinks that rebound requires millennials to be exactly who we thought they were AND….have babies, but that’s a separate post…

Don’t forget to RSVP for the Millennial Week Innovation and Entrepreneurship Forum – June 18 at 1776 in Washington, DC!