In honor of National Women’s Small Business Month, this post celebrates black female entrepreneurs from this season of ABC’s “Shark Tank,” while highlighting the value of African American women as small business owners in the American economy…

Earlier this month, Memphis-based Angels and Tomboys® secured a deal with Sharks, Daymond Johnand Mark Cuban. Later this month, Philadelphia-based LuLu Bang will pitch their business to the Sharks. 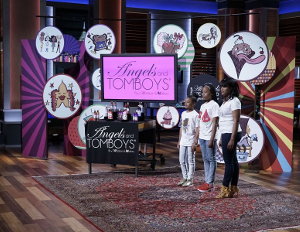 On episode four of Season 8, Mallory, Madison, and their mom Viera pitched Angels and Tomboys to The Sharks. The initial ask was $55K for 20% of the company, marketed toward girls ages five to 12.

After sharing their story and motto, “All girls are created equally different,” with $58,000 in revenue to date, Mark Cuban and Daymond John invested $60,000 for 33% of the company.